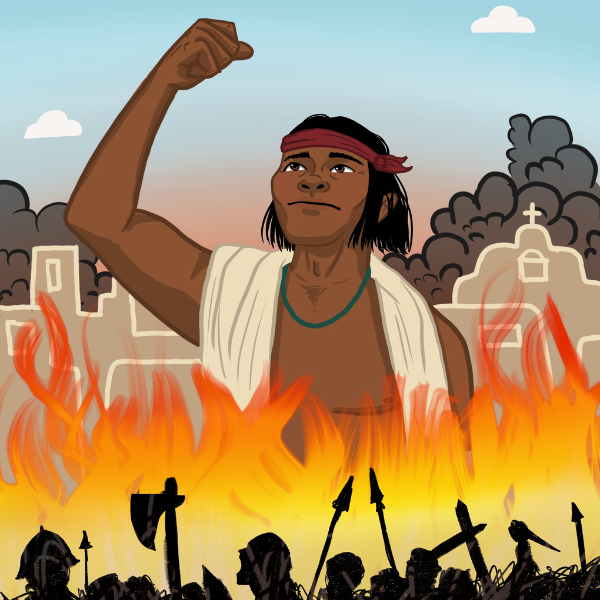 This show is taken from our podcast curriculum: “A Brief History of the American Southwest for Kids.” Visit our History Page where you can find the Learn-Along Guide to accompany the entire series.

This time on The Children’s Hour, we have a different kind of show. This episode is taken from our six episode educational podcast series called “A Brief History of the American Southwest – For Kids” which was produced through multiple virtual field trips to sites of significance in our high desert of New Mexico.

The story begins nearly 23,000 years ago, when people began migrating through, hunting, and living in this part of the world. Fossilized footprints tell the tale of teenagers hunting now-extinct giant sloths, and a mother who sets down her young child for awhile, only to pick her up again. David Bustos from White Sands National Park, Piro-Manso-Tiwa Tribal Preservation Officer Diego Medina relates how his community has always known about the footprints, and archaeologist Mary Weahkee from the New Mexico Center for Archeology describes what life was like back then for these original inhabitents.

After nearly 20,000 years, the Chacoan era arrives. We can see today the complexity of Chaco Canyon’s architecture, engineering, and governance demonstrating the sophistication of the Southwestern cultures. Chaco Culture National Park’s interpretive ranger Nathan Hadfield explains what was found in Chaco, who lived there, and what mysteries remain.

Then in 1530, uninvited guests arrived in New Mexico in search of the mythical Seven Cities of Gold, confronting the A:shiwi A:wan (Zuni) community with horses, metals, guns, all of which were never before seen in this area. Curtis Quam from the A:shiwi A:wan Museum and Heritage Center describes what that period was like for the Zuni, and we see the spread of Spanish domination over the Indigenous people throughout the region, with the development of churches built atop existing Pueblos, enslavement of locals, and rule by the Spanish Crown.

In 1680, America had its first successful revolution: the Pueblo Revolt. We learn the story of Po’Pay, the religious leader and runner from Ohkay Owingeh just outside of Santa Fe, New Mexico, organized the entire Pueblo community. In spite of the great distances and different languages spoken by the Puebloan people, Po’Pay set a date for a revolt. Simultaneously, across the entire region the Pueblo people turned against their Spanish rulers, and sent them running back to Mexico.

Twenty years later, the Spanish returned with more arms, people, and might and overtook the Puebloan people. It became clear that for survival, there must be peace. We learn how the Spanish King handled doling out the lands of the Southwest to attempt to foster peace. Plus we find out how after hundreds of years, the Spanish and the Puebloan peoples were creating mixed communities, both out of force and choice. We visit a traditional hacienda of this period, Los Luceros, and learn how such a place came to be, and still survives to this day.

Finally, we come into the period of time when this area was nationalized by the United States, a fledgling country itself, after the end of the Spanish-American War, and the signing of the Treaty of Guadalupe Hidalgo. Historian Melanie LaBorwit walks us through the rapid changes in infrastructure that was imposed upon the desert southwest, and archeologist Mary Weahkee explains what cultural impact these changes had upon the Indigenous communities now ruled by a new government.

Visit our Brief History of the American Southwest for Kids Page

The full, unedited virtual field trips are available to provide more details, along with our 6 part podcast series with a companion Learning Guide to bring this rarely taught part of American History into classrooms around the world. Find them all at our History Page – button above!